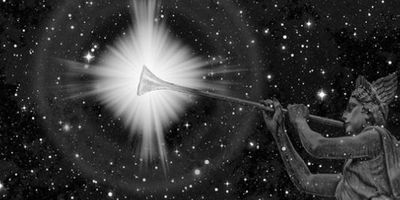 December 21st is the Winter Solstice, the shortest period of Day Light and Longest Night Of The Year.

But in the year 1226 when this double-star appeared last

is also when St. Francis of Assisi died as well..

Bill Kristol famously said that in the natural course of events, “things begin as a movement meant to accomplish something, become a business made to make money from it and becomes a Con, meant to perpetuate making money.” In his case he was speaking about the Republican Party.
But sadly, I can make a good case that in fact that is the truth about American government and democracy.
The two party system is an anachronism, based in the notion of there only being two points of view. That 2 private clubs best represent the American people.
All of which, is simply absurd but we not only allow it, some defend it as democracy, which it is not.
It is where the things needed by the American people go to die. And where the special interests get what they want with direct access due to, pay for play.
This is in fact the very reason we fought the Revolutionary War, government without representation for the vast majority of the American people. Just what we have now.
.
While the personal imperfections of the Founding Fathers is evident, their intention to create a government that does it’s best for its people is self-evident. The British monarchy held all of the cards when it came to doing the things needed for the American people. Now it’s the rich Cons (Conservative Authoritarians).
Different place, different time, same old shit. In a money driven system, money is the only conversation.
And that is exactly where we now stand.
The simple truth is that our democracy has become a scam. It no longer fulfils the object of the exercise, to provide the people being ruled a voice in that rule. Or as the Founders said, a consensus of the people. That is no longer the case.
.
That the very things that were self-evident to the Founders cannot be found with a microscope in today’s version of their great experiment.
That life liberty and the pursuit of happiness has been replaced by the ownership of things, a right of willful ignorance and screw you! As we begin the 21st century, we forget the things the 18th century was trying to fix.
That the divine right of kings authoritarianism be replaced with a meritocracy based ruled through a consensus, of the people. Now it is just an economic based authoritarianism based in the epic size of egos and money.
This should have been a time of fighting new battles, building new things as an American society but sadly the same forces that drove the American Revolution and Civil War are still very much in play.
We in fact live in the time of the “Great Retraction.” The retraction of the true promise of democracy to be replaced by flat screen televisions, cell phones, myth and lies and the same authoritarianism we fought against again and again.
Our version of the great experiment has simply become an institutionalized scam. It no longer functions as a voice of the people, in fact every party elected official reaches out to the rich to get elected and in turn sell bits of their souls and our futures.
.
You can see the direct result in the joke of a stimulus bill just passed. Months late and Cons screaming that it is bankrupt the nation when in truth it is about stock and bond positions for their wealthy patrons.
That the Republicans don’t want to look like the assholes they are, before the coming Georgia special election, so they allow a trickle down.
The Democrats at times, do their best but are ready to stick a knife in any real progressive candidate. Sadly, we live in a time when the process has become a scam, owned by authoritarians.
That the consensus that powers the nation consists of dollars and meet in board rooms and in the shadows, and is not that of the American people.
The Foundations! Truth, logic, ethics and honesty of intent.
RC / Richard Romine

“But judge not according to the appearance: but judge Righteous Judgment…”

“Because thou hast kept the word of my patience I also will keep thee from the hour of Temptation,
which shall come upon all the world, to try them that dwell upon the Earth..”
Revelation 3:10
24 For there shall arise false Christs, and false prophets, and shall shew great signs and wonders; insomuch that, if it were possible, they shall deceive the very elect….”
Matthew 24:24
I chose these particular quotes along with the picture of the White Rabbit as the hour of Donald Trump’s expulsion from the White House comes closer and closer; because they both illustrate the same thing of what happens when people sell themselves to Mammon because God doesn’t give you anything that you want immediately unless it aligns with his Will, and since most people are not concerned about the will of God whatsoever but what they can get immediately and instantly to gratify their base desires, the Hour of Temptation has signaled the fall of what we call the 1% to where these Hatefilled Birds of Prey all end up in something called the Golden Cage of Babylon, before Somebody at the end picks up the Cage and drops it into the Lake of Fire: which is obviously what my Father Jesus is going to do as His Return on the Great White Throne as the Living God, ie ” in the Flesh”, sitting on the Throne of His Glory in the position of “God in His Righteousness”.

But we must see that there is much more to the current state of events than what is apparent on the surface… and I intend to show those who care that the fulfillment of the Scripture at the End is Predestined beyond any doubt; but I will do what few would even try to attempt; I shall offer Proof….

“When a prophet speaks in the name of the LORD and the message does not come to pass or come true, that is a message the LORD has not spoken. The prophet has spoken presumptuously. Do not be afraid of him.” – Deut. 18:22

No matter if you like it or not, Joe Biden won the US presidential election. This is very awkward for all the pastors and televangelists who claimed that God had told them that Trump would be reelected. Some of them even claimed that he would do so “by a landslide”.

As of this writing, only Vallotton has apologized for his mistake – and even he took his apology down after many of his followers protested.

Of course, this raises the question: if these church leaders were wrong about this, what else are they wrong about? Most of them were not only predicting Trump’s victory, but hoping for it. Some of them described his presidency as “goodness” even as it included a complete disregard for refugees and people affected by climate change.

It’s time to reevaluate what kind of leaders we want to be influenced by.

I wouldn’t go so far as to say that these church leaders are all false prophets. Like Bible scholar Craig Keener, I think one can do prophetic mistakes without being influenced by demons.

Still, such mistakes should be taken very seriously. As Beth Moore recently pointed out, Christian Trumpism has turned out to be extremely seductive and dangerous, doing massive harm to the body of Christ.

This was evident at the recent Jericho March in Washington D.C., where evangelicals were told to worship the virgin Mary in order for her to send angels in support of Trump, and where conspiracy theorist Alex Jones shouted that the Trump movement is “the great revival before the Antichrist”.

I believe in prophecy, and I believe in Christians praying for political leaders. But when prophecy is used as a tool to promote partisan goals and demonize people of another opinion, that can only be described as spiritual abuse.

Micael Grenholm is a Swedish pastor, author, and editor for PCPJ.

Pentecostals & Charismatics for Peace & Justice is a multicultural, gender inclusive, and ecumenical organization that promotes peace, justice, and reconciliation work among Pentecostal and Charismatic Christians around the world. If you like what we do, please become a member! today !!!!

Salvation of the Child of Samuel

The Coming of the Son of Man

The Child of the Resurrection

The Nemesis of Death: the Second Death

Fatimah, the Christ of Islam and the Mahdi of Christianity

'Evil Servant Cut Asunder' from Matthew 24:48 'Moon cleft Asunder from Qur'an @mujtahidd @NewUnification Akiane Kramarik Akiane Kramarik and Colton Burpo with the "sheep" Alex Jones as a Demagogue Alex Jones as Dr. Pieczenik's Puppet Alex Jones is a Demagogue Amaterasu-ōmikami As Rev. Moon's 'holy spirit' American Caesar: Donald Trump Angel of the 7 Vials as St. Francis Antichrist Osama bin Laden Blue Star of the Hopi Bowie and King Arthur Brad Bufkin as Elijah Brad has red hair like John the Baptist Breitbart Editor Steve Bannon Buddha as Avatar of the South Child of the Resurrection Chris Hedges and the Third Israel Confucious as Avatar of the East Cup of Gold as Principle of Indemnity Dabbat al-Ard Death of Moon Donald Trump Dr. Hak Ja Han Moon Dr. Pieczenik Elijah Elijah; the Seal of God Faithful and Wise Steward Giovanni the New Daystar Gordon Ross and the changed "Divine Principle" Gordon Ross and the failure of Moon in 1976 Gordon Ross and the Messiah Moon destroyed Holy Spirit in the form of a Dove Hyo Hin Moon and Jacob Jeffrey Epstein and Donald Trump John the Beloved and Jesus Jonathan and David Jonathan Gullery at HSA-UWC Kirsti Nevalainen Larry Nichols and the Clinton Death Squad Last Day of Noah's 7 last days Lords of the New Church: the Party Maryam al-Kubra Mary of Bethany and Jesus Michael. Unicorn. Scarlet Beast as Red China Monique Tiffany Scott as Child of God Moses; the Wife of Jehovah Napoleon Hendrix: and the one who got away Pikareum as Korean Sorcery Quetzacoatl the Avatar of the West Red China the Scarlet Beast Rev. Moon and th Failure at Yankee Stadium in 1976 Rock Scully Senator Joe Biden Sirat al-Mustaqim Socrates as Avatar of the North Solomon the Prodigal Son St. Francis as John Steve Bannon the Angel in the Sun of Righteousness the Chariot of Elijah is the Name of the Son the Chariot of Israel is the Name of the Father The Contribution of The Light of Rev. Moon the Evil Servant as Rev. Moon the golden calf the Golden Gate of the Sun of Mary The Man of Sodom The men of Sodom: and the Name of Mary The Phallus of God The Pope as St. Francis Returned at Last Day The women of Babylon Willie Brown and Cocaine Blues